Norman Mordue grew up in Elmira, New York and played high school football as a quarterback. He was awarded a full football scholarship to

Syracuse University to play under Coach Ben Schwartzwalder.  He was a member of the 1964 Sugar Bowl team.

Judge Mordue graduated from Syracuse University in January 1966 with a Bachelor’s degree in Economics.

Army as a Second Lieutenant in the Infantry.  After the Infantry Officers Basic Course, he reported to his platoon in the First Air Cavalry Division.

operation in the village of An Qui. When another platoon was pinned down by heavy machine gun and grenade fire from a numerically superior and

well entrenched insurgent force, Lieutenant Mordue immediately led his platoon on a fierce attack to relieve the pressure on the engaged unit.

Seeing two of his men wounded and pinned down, he grabbed a machine gun and braved withering enemy fire to rescue them. He then moved to

the front of his platoon and personally destroyed two enemy bunkers and killed five hostile soldiers in the ensuing offensive. Severely wounded and

unable to walk, Lieutenant Mordue refused medical aid and directed the withdrawal of his men as deadly artillery strikes were called in on the Viet Cong positions.  Lieutenant Mordue was awarded the Distinguished Service Cross for extraordinary heroism, our Nation’s second highest military honor.  He was also the recipient of the Bronze Star with V device for valor for “courageous leadership and tenacious devotion to duty.”  Additionally, on 2 May 1967 Lieutenant Mordue received the Purple Heart, the Air Medal and the Combat Infantryman’s Badge.  He was medically retired as a Captain in December of 1968 because of wounds sustained in combat.

When medically discharged from the service, he met with a gentleman from the V.A. who suggested some aptitude tests.  After took 3 days of testing, the tests showed a score of 92% in the area of law.  Mordue was told if he gets into law school, the V.A. will pay for tuition, books and a monthly stipend.  He went home and told his wife he was going to go to law school.

While in law school, Judge Mordue worked for two years as Law Clerk in the Onondaga County District Attorney’s Office.  After graduating in 1971, as a member of the Justinian Honorary Law Society and the recipient of the Phi Alpha Delta award for academic excellence, he continued for ten more years as a prosecutor.  He worked his way up from Law Clerk to Chief Assistant District Attorney in charge of Felony and Homicide prosecutions, with a 100 percent conviction rate.

After leaving the District Attorney’s Office, Judge Mordue served as an Onondaga County Court Judge from 1983 to 1985 and as a New York Supreme Court Justice for the 5th Judicial District from 1985 until his appointment to the United States District Court.  Judge Mordue joined the Federal Bench on December 4, 1998, following his presidential nomination and Senate confirmation in October 1998.  The Senate voted on Judge Mordue’s nomination in just 16 days, the shortest time to confirm any judge during the entire Clinton administration.  Judge Mordue served as Chief Judge for the Northern District of New York from March 13, 2006 to December 15, 2011, taking senior status on July 1, 2013.

Judge Mordue was the President of the Korea-Vietnam Memorial Committee which oversaw the building of the Onondaga County Korea-Vietnam Veterans Memorial on West Jefferson Street.

Judge Mordue has been recognized in his professional career with the Zunic Award by the Syracuse University Football Club which is given to a person who exemplifies courage, self-sacrifice and spirit.  The Onondaga County Bar Association honored Judge Mordue with its Ruger Award for outstanding legal achievement in devotion to the principles of our system of Justice.

Judge Mordue was inducted into the Syracuse University ROTC Alumni Hall of Fame. 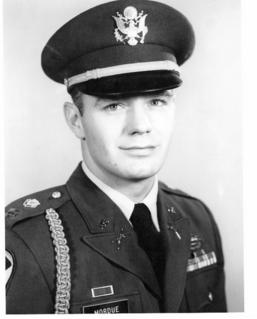